Seven members of a family killed in Guatemala 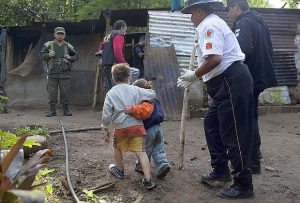 epa03426992 Carlos Daniel Gonzalez (L), 6, holds his sister Izabel, 4, as they are accompanied by authorities after unknow gunmen killed their parents and other relatives in the municipality of Villa Canales, 22 kilometers from Guatemala City, Guatemala, 09 October 2012. Seven members of the family were killed, including two minors. Carlos Daniel survived as he hid during the attack. EPA/Saul Martinez