We are ready for delivery a unique coffee: El Salvador Cup of Excellence “Hamburgo / Nejapa”!

Below is the card of this very high quality coffee.

Finca Nejapa is located in the Apaneca-Ilamatepec mountain range, in Laguna Verde, Apaneca, Department of Ahuachapán. The farm is approximately 30 manzanas (21 Ha) with an altitude ranging between 1,480-1,580 masl. Coffee is grown in an area of some 17 manzanas (12 Ha.) The farm has a large number of shade trees that help preserve both coffee plantation and the environment for a variety of birds and small mammals that could be observed in their natural habitat. To the west, on the higher part of the farm, it neighbors with the Nymph Lagoon, an extinct volcanic crater and sanctuary for migrating birds. From here, the spectacular panoramic view includes the Santa Ana and Izalco volcanoes and the Pacific Ocean shoreline.
The farm owner, Gloria Mercedes Rodríguez, is an established specialty coffee grower, very active in the development of quality focus in her area. Her farm, Nejapa, has been previously awarded by Cup of Excellence in 2008 and 2009 with different plots, as well as other small farms of her property other years. This year, a young plot named Hamburgo, which takes its name after the city in the north of Germany, participated for the first time and was honored with the 3rd. place. The delicious breeze that caresses the plantation a reminiscence of the spring winds that touch and refreshes the German city from the North sea. Main cultural practices include: Manual weed control, shade tree pruning, off-shot thinning, soil conservation practices, wind-break barriers management, root and stem bending, as well as a renewed attention to better nutrition of the plant and soil life improvement, among others. A huge importance is given to harvesting only the ripest possible cherries, measured visually, tasting mucilage and by using refractometer. Cherries are depulped and fully washed the same day and dried on raise beds only for 18-20 days, aiming for 10.5 to 11% moisture, then parchment is rested for about a few days and then stored on grainpro plus jute bags.

HAMBURGO PLOT: The lot awarded this year comes from a four-year-old plot planted with both Bourbon and an Ethiopian heirloom variety baptized by us as Elefante, due to the larger and round size of its cherries (not to be confused with Maragogype or other large-seeded variety). It was found a few years back in another of Gloria´s farms, and since then, it has been researched, nurtured and reproduced for her new plantations due to its organoleptic characteristics. Older trees from this variety have an estimate average of 30 to 35 years old planted. The winning lot was only taken from Elefante that Gloria grows at this plot. These cherries are nearly two times heavier than Bourbon due to its larger amounts of mucilage, its mucilage flavor express both a honeysuckle or ripe papaya/tropical fruit very similar to the Ethiopian strains. Although the cherry is round, the seed express some long characters similar again to some heirloom types. In some beans it is also possible to find a little horn on one of the sides of the green bean. It is not rare to extract around 9 to 15 drops of mucilage per cherry. The tree is a low yield variety and has a high cherry-to-green bean ratio, meaning we get lower green bean for the same amount of cherry weight from this variety in comparison to Bourbon, nonetheless, screen size is better due to the larger size of the screen of Elefante. 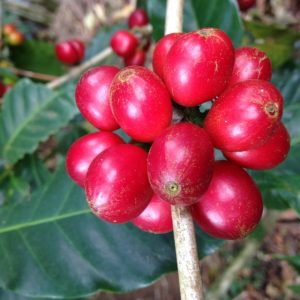 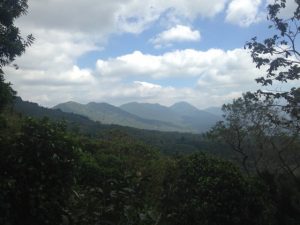 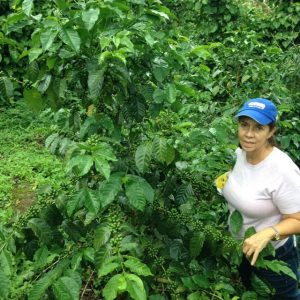